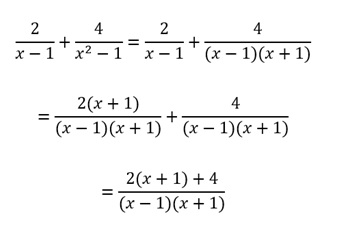 When it comes to manipulating fractions in mathematics problem sums, students are most prone to making careless mistakes. There are many reasons for this which can range from not being familiar with the rules involved in manipulating fractions, to overlooking signs. Below are some of the common mistakes that students usually make and how they should be corrected.

1. Not factorising the denominator of a fraction before combining fractions

Before combining fractions, always make sure the denominators are fully factorized into linear factors where the highest power of  is 1.

By doing so, often you will find common factors between the two denominators.

Students can get mixed up in handling fractions in an equation and expression. When a fraction is multiplied to another fraction, students may mistakenly carry out multiplication diagonally.

Students may be mixed up with the cross multiplication carried out for fractions in an equation:

The above example of cross multiplication is only applicable for equations where an equal sign is in between two fractions.